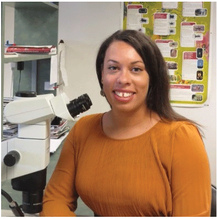 August 1, 2017
Hired!
Congratulations to lab alumna Dr. Mercedes Burns, who has joined the faculty of the Department of Biology at the University of Maryland - Baltimore County as an assistant professor. It's great that she has gainful employment in academia and even greater that she is just up the road.

July 17, 2017
Bug Camp completes another successful summer!
Congratulations to Assistant Directors Grace Anderson and Kiley Gilbert for leading another great Bug Camp and introducing 48 campers to entomology. Thanks to SESYNC;  the  faculty, graduate students and staff of the Department of Entomology; and 4-H for making this possible.

January 3, 2017
Jeff's photo of Leiobunum ventricosum on the cover of the latest issue of the Southeastern Naturalist

The photo is associated with the article

My name is misspelled in the photo credit, but, hey, you take it where you can get it. Am I right?

August 1, 2016
Jeff steps down as Membership Secretary of the American Arachnological Society after 14 years of service.

It was real and it was fun, but it wasn't real fun.

July 29, 2016
Bug Camp completes another successful summer!
Congratulations to Assistant Director Grace Anderson for leading another great Bug Camp and introducing 39 campers to entomology. Thanks to SESYNC; Camp Coordinator Julie Colatrella; the  faculty, graduate students and staff of the Department of Entomology; and 4-H for making this possible.
July 2 - July 9, 2016
20th International Congress of Arachnology, Boulder, Colorado
It was great to see so many arachno-friends at the ICA. Lots of great talks, events and field trips. There were cookies everywhere but not enough coffee. Still, it was great to see lab alum Mercedes Burns, who gave a great talk on the obligate and facultative parthenogenetic harvestmen of Japan. Jeff gave an invited talk on the functional morphology of arachnid leg joints in the symposium Locomotion and Kinematics: From Joints and Legs to Whole-body Performance. The meeting was the largest assemblage of arachnologists ever!