PAST PROJECTS and LONG-STANDING RESEARCH INTERESTS

Functional Morphology and Biomechanics of Arthropods
My interest in functional morphology and biomechanics, especially locomotion, began very early. My undergraduate thesis (the first completed in the Dept of Zoology at Michigan State University) was a comparative study of movement in spiders. I have worked on a variety of related projects since, including surface-film locomotion in semi-aquatic spiders, a test (and falsification) of Sidnie Manton's model of centipede locomotion , a study of center-of-mass movements in running harvestmen , and an intensive study of the fluid mechanics of gill ventilation in mayfly naiads.  My students, collaborators and I have used a variety of techniques to complete these projects, including video analysis of moving animals, electromyography as well as measurement of very small forces and internal fluid pressures. 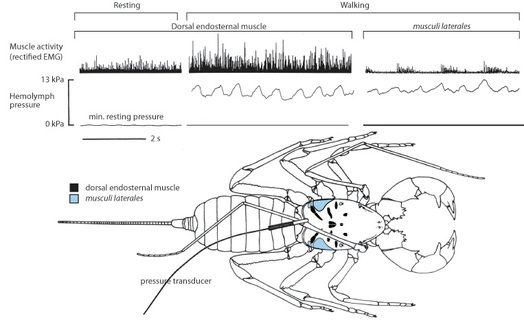 Evolution of Propulsive Leg Extension in Arachnids
Arthropods are diverse in virtually all aspects of their biology, including the mechanisms they use to operate their leg joints.  Based on our own anatomy, it is natural to assume that arthropods use antagonistic sets of muscle to flex and extend their joints, and many do. However, spiders are known for the absence of extensor muscles and the use hydraulic pressure at several joints. My early work was aimed at understanding how spiders lost their extensor muscles, so I conducted a comparative analysis of the locomotor apparatus of representatives of all arachnid orders and horseshoe crabs and mapped these characters on a cladogram.  The absence of extensor muscles emerged as a primitive feature of arachnids, not a derived feature of spiders. In fact, extensor muscles were “invented” several times from pre-existing muscles in several arachnid groups, and some evolved elastic sclerites to store energy used in flexion for use in subsequent extension. Thus spiders did not lose extensors, they never had them.

I also noted that those arachnids that lack extensor muscles also tended to have large dorsoventral muscles associated with an internal structure called the endosternite, while those arachnids with extensors and/or elastic sclerites had reduced or lost these muscles. This suggested that dorsoventral compression of the body by these muscles produced the pressure used in to extend joints in "hydraulic" arachnids.  However, arachnologists at the time assumed that spiders used a different set of muscles (musculi laterales) to generate hydraulic pressures. I tested the two models using the giant whipscorpion, an arachnid that is similar to spiders in using hydraulic extension and in having both large endosternal muscles and musculi laterales (see figure). I used electromyography to record muscle activity from both muscle groups and a miniature pressure transducer to record internal internal fluid pressure in freely walking animals. Correlation between the intensity of endosternal muscle activity and internal pressure clearly supported the endosternite model.

Although arachnids use diverse methods of leg extension, the anatomy of flexor muscles is similar and I wondered if firing patterns were also the same.  I recorded muscle activity in six homologous muscles in whipscorpions, which use hydraulic extension, and scorpions, which use peculiar extensor muscles.  This revealed similar electromyographic patterns in flexors, suggesting a conserved motor program. I hypothesized that the magnitude and timing of extension force produced by these different mechanisms were also similar despite difference in how they are produced. Years later, with graduate student Andrew Sensenig, we measured the forces produced at leg joints by hydraulic pressure and elastic sclerites in various arachnids and found them to be remarkably similar. We suggested that the central motor programs are difficult to change and thus act as a kind of internal selection that constrains mechanical innovation. 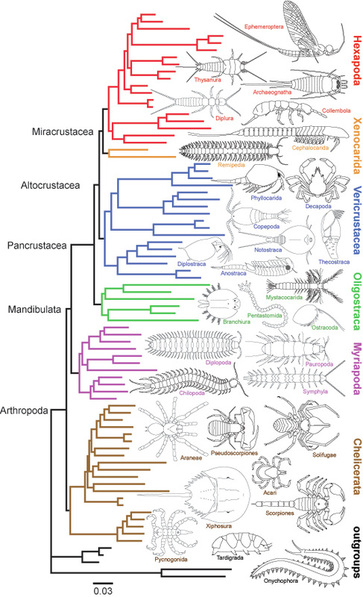 In the mid-1990s I began a collaboration with molecular biologist Jerry Regier to resolve relationships among the major arthropod lineages. We used RT-PCR to obtain cDNA via reverse transcription of mRNA, a method that avoided  introns and other problems associated with sequencing nuclear DNA. We developed several conserved genes, notably EF-1alpha, EF-2 and RNA polymerase II, at a time when most workers still relied on mitochondrial genes or nuclear 18S and 28S ribosomal sequences.

Our earliest analyses corroborated the then-controversial Pancrustacea hypothesis--that hexapods are terrestrial “crustaceans”--and falsified the traditional morphology-based view that hexapods are closely related to myriapods. We also explored relationships among the myriapod classes and orders, among basal hexapods, among major crustacean groups, and among tardigrades.

In 2002 we launched an assault on the remaining “big” problems in arthropod phylogeny, especially relationships within Pancrustacea (including the identity of the hexapod sister group), the placement of myriapods with respect to Pancrustacea and Chelicerata,  whether pycnogonids (sea spiders) are the sister group to all other arthropods or to euchelicerates, and the relationships among the arachnid orders. Armed with a $1.3 million NSF grant and  collaborator, Cliff Cunningham (Duke University), we developed  and sequenced 62 conserved, nuclear protein-coding genes from 80 taxa representing all major arthropod groups and two ecdysozoan outgroups. The concatenated, aligned sequence stretched over 41 kilobases and the matrix encompassed ~3.2 megabases. We used a variety phylogenetic methods and consistently recovered Chelicerata, Mandibulata, Myriapoda, Pancrustacea and Hexapoda and several new “crustacean” clades as monophyletic groups, with the controversial Xenocarida (i.e., Cephalocarida + Remipedia) emerging as the sister group to hexapods. In contrast to these interesting findings, I was frustrated by our inability to resolve relationships among the arachnid orders, as I have spent many years trying to resolve this problem and even included a representative of each arachnid order in the grand molecular analysis.

Our results were published in Nature and were widely considered a tour de force, but it was also a grand finale of sorts for the targeted-PCR approach. Next-gen sequencing now allows the assembly of large data sets from many taxa without designing hundreds of degenerate primers to amplify predetermined genes or gene regions. Still, our results have tended to be supported by more-recent next-gen analyses.

Evolutionary Morphology and Phylogeny of Chelicerates
The phylogenetic relationships among the 11 extant arachnid orders (spiders, scorpions, mites, harvestmen, etc.) have always been an outstanding problem in arthropod evolution. My interest in the subject began during my doctoral work, which was devoted to the evolution of locomotion in arachnids. The goal was to map relevant anatomical and functional features on the cladogram that was widely accepted at the time, but the phylogenetic implications of the skeletomuscular features I was assembling seemed to be incompatible with that cladogram. I explored this inconsistency by combining new and traditional characters in the first  parsimony analysis of arachnid ordinal relationships. The results appeared to overturn several long-held views, including the hypotheses that spiders and amblypygids are closest relatives and that scorpions are the plesiomorphic sister group to all other arachnids.  These results were controversial, especially the proposal that scorpions are relatively derived arachnids. The work was published in 1990 and is still depicted (for better or worse) on the Arachnida web pages of the Tree of Life Project and UC Berkeley’s Phylogeny of Life site. Subsequent workers combined my data matrix with their own molecular sequences and have tended to find the same results, but this may reflect  weaknesses of the molecular data of the time rather than the strength of the phylogenetic signal in the morphological data.

While the phylogeny was influential, progress in systematics highlighted shortcomings—a relatively small data matrix, reliance on ordinal “ground plans” as terminal taxa, omission of fossils, and over-representation of characters associated with locomotion. As a remedy, I began a series of exhaustive anatomical surveys of  muscular systems in targeted chelicerates, including Limulus, scorpions, amblypygids, thelyphonids and harvestmen. During this work, several arachnological problems were solved. For example, scorpion embryos were known to have 13 opisthosomal segments but adults appear to have only 12. Where did the 13th segment go? Scorpions also have  a unique muscular diaphragm separating the prosomal and opisthosomal hemocoels. How did it evolve? The answers to these two questions were related: evolution had built the diaphragm via longitudinal compression of the first opisthosomal segment,  which lost its tergite and sternite in the process. Thus external evidence of the first segment disappeared but the internal elements were all retained. This finding was corroborated by other workers using molecular developmental  analysis.

I integrated information derived from these and other studies in a new parsimony analysis that included multiple representative from all extant and most extinct euchelicerate lineages.  The results provided strong support for the monophyly and interrelationships of the tetrapulmonate orders--that is, (((Thelyphonida, Schizomida) Amblypygi) Araneae)--but few other relationships. There was some support for monophyly of Scorpiones + Opiliones and for Pseudoscorpiones + Solifugae. Recent molecular systematic work--even our own-- has also failed to resolve arachnid ordinal relationships, except for the relationship among tetrapulmonates recovered by analysis of morphological data. As it stands, the phylogeny of arachnid orders is largely unresolved and remains an enduring problem.