Multivariate species delimitation using phenotypic data
Despite a consensus that species hypotheses based on several kinds of evidence are more stable than those based on one kind, significant biases persist in the development, use and perceived value of certain data sources. Notably, the use of DNA in phylogenetic reconstruction and species delimitation has flourished in response to technological and analytical innovations. In contrast, the field has been slow to develop and adopt modern quantitative approaches to the analysis of phenotype, and alpha taxonomy has yet to embrace approaches that emphasize morphometrics, behavior or the analysis of large phenotypic datasets. In the absence of such methods, any claim that phenotype is inferior to DNA for delimiting species must be considered untested.  Collaborators Kasey Fowler-Finn, Hannah Wood and the Shultz Lab have developed a project that uses modern approaches (geometric morphometrics, micro-computed tomography, high-speed video, etc.) to visualize and quantify reproductive phenotype, assembles these data into large population-by-variable matrices, and uses multivariate methods to generate clusters of populations that represent species hypotheses. Because this methods focus on the discovery and use of composite or latent variables (or dimensions), we have called this approach multidimensional analysis of phenotype. We plan to use leiobunine harvestmen as a test case and to compare our results to those obtained using molecular data. 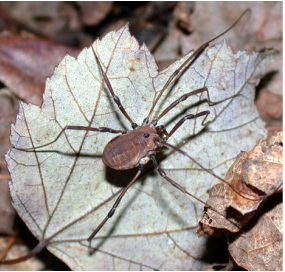 Taxonomy of the endemic North American harvestman genus Hadrobunus
Hadrobunus tend to be large-bodied, ground-dwelling harvestmen with relatively short legs and tiny thorn-like denticles on the dorsal surface. Until recently, the genus was thought to comprise two similar species in eastern North America (H. grandis and H. maculosus), distinguished primarily by their geographic distributions. Two additional species had been described from from Mexico (H. davisi and H. knighti).  My revision of the genus has thus far revealed up to 17 species, with 15 from the eastern United States.  While most species are superficially similar, the reproductive features have undergone significant diversification and sexual coevolution. In some species, the males have massive, heavily muscularized penes and females have complex and heavily sclerotized  pregenital barriers.  In others, the male has a short penis with a pair of gift-bear sacs and the females have little or no pregenital armature.

Evolution of mating and reproductive morphology in the leiobunine harvestmen (daddy-longlegs) of eastern North America
The systematics of terrestrial arthropods, including the identification of species, has long depended on the unique features of genitalia and other sexually dimorphic features. In attempting to understand the systematics of harvestmen, we found many new features in both males and female harvestmen that seemed to suggest functional coevolution between the sexes. Specifically, in species where males have sclerotized penes and large clasping palps, the females have modifications of the pregential opening that would appear to resist penetration by the male. In other species, males have short, weakly sclerotized penes and penile sacs that deliver a nuptial gift and females lack any special pregenital armaments.

To understand the evolution of this system we had to determine whether do the harvestmen of eastern North America form a monophyletic group or are they an assemblage of distantly related forms;
Powered by